Su-Jok Acupressure is a Physical & Metaphysical, Natural Therapy of healing without drugs.

Acupressure is a 5,000 year old massage technique used in Chinese medicine. Though it is related to acupuncture, which involves the use of needles, Su-Jok acupressure only requires a skilled pair of hands.

Pressure is applied at points that correspond to various body parts with the intention of eliminating blockages to reduce pain or disease. The Chinese Medicine Acupressure Ring “ACU-RING” have been designed for an intense yet safe stimulation of the fingers. These points, sometimes referred to as potent points, lie along paths of energy in the body called meridians. The goal is to bring the body into balance and to remove blockages of energy along the meridians.

This alternate therapy has been evolved by south Korean scientist Prof. Park Jae woo. This therapy when compared to other method of alternate treatment, sujok is simple & uncomplicated, It can be compared with the best self cure methods known to man today.

The high effectiveness & simplicity of the sujok therapy helps its rapid spreading in various countries among therapists & patients. Sujok is a method that matches the classical science of the west to the knowledge accumulated by the oriental medicine from ancient times. 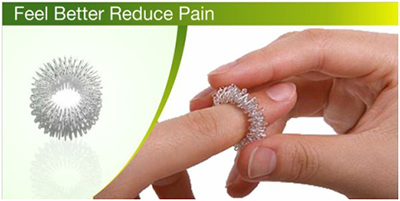 This therapy at its most basic employs acupressure, the effect of employing simple acupressure stimulation to treat various health problems on the corresponding points/areas on either the hands or feet has forward to gives very high effective form of treatment & sometimes complex ailments & long standing disorders and the need to resort to accupunture by doesn’t arise.

The name SUJOK speaks about the therapy.The word “SU” in Korean means the hand and “JOK” means foot.The most astonishing aspect of this therapy is the simplicity. Anybody who desires himself to learn the basics of sujok therapy can do so within a matter of minutes. This points / areas are composed in a very strict anatomical order, reflecting the structure of the body (human or animal) in a diminished form on them (Hand and Feet).

Su Jok therapy does not rule out traditional medical help, especially when medication is required. But proper and timely use of Su Jok techniques before the arrival of a doctor can sometimes save human lives.